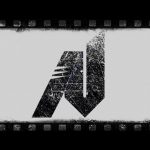 Danger Diva is an amazing idea. As a film, it took me awhile to enjoy. Given that modern Western fiction is giving way to Altered Carbon and Black Mirror, this material shouldn’t feel that out of place. Yet the musical element forces you to examine it from a different angle. Originally, we were going to cover the film in late summer, but I hit a wall with it. Was I watching it right?

Now, the DVD/Vinyl combo has been released…I realize that I wasn’t approaching it correctly. Getting to play the vinyl along with the film allowed me to see what was going on better. Thunderpussy pounding away on my converted Peavey speaker helped make elements of the first and second act pop. After all, we’re watching a tale of a young woman giving over her natural talents to a corporate machine cheating death.

Imagine if you will be a hard rocker staring down the opportunity of easy money, while getting an implant to enhance your voice. Sure, they are using your voice to control their working populace. It’s just that it’s insane to imagine a singer commanding legions by the sound of her voice. More than anything, it made me think of the old Ant-Man/West Coast Avengers villain The Voice.

Naturally, control is lost and we have our singer heroine fighting for her life against an evil tyrant trying to live forever. Is it cyberpunk? Sure. But, the film works on a sheer audio/visual rollercoaster ride like experience. Just the constant pounding of audio, as the plot shifts back and forth creates something that I didn’t see elsewhere in 2018. In fact, it makes me glad that I took extra time to approach the film, as I was watching only half-fulfilled.

If you check it out, make sure to pick up the Danger Diva Vinyl/DVD combo. It will make all the difference.

Troy Anderson is the Owner/Editor-in-Chief of AndersonVision. He uses a crack team of unknown heroes to bring you the latest and greatest in Entertainment News.