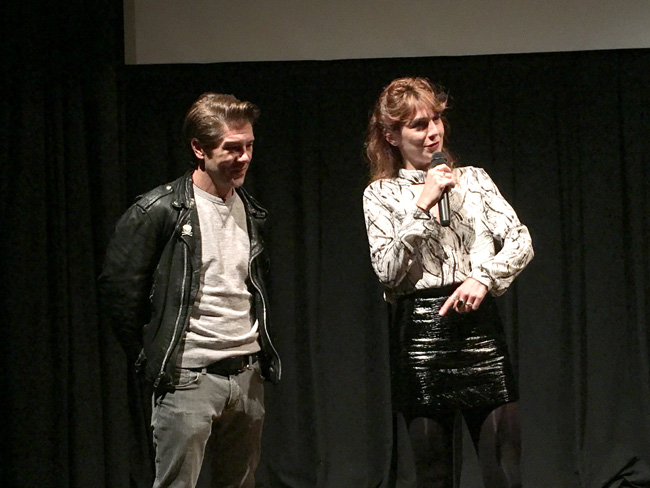 Robert McGinley spent the better part of two decades making “Danger Diva” happen, then spent a little more than 20 days shooting the film entirely in Seattle — when you see a skyline, it isn’t Vancouver with the Space Needle superimposed.

It takes place sometime in the future, and is apparently meant to be the last in a trilogy that includes “Shredder Orpheus” and “Jimmy Zip,” but seeing these films isn’t necessary to enjoy McGinley’s “Danger Diva.” 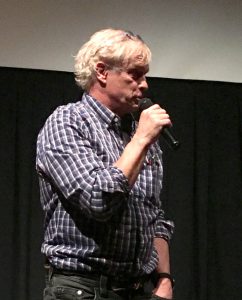 “Danger Diva” writer and director Robert McGinley introduces the film prior to its screening at NWFF.

There’s something oddly familiar about this film. When you watch “Danger Diva,” it feels like that fun, though absurd ‘90s sci-fi movie you might have on VHS somewhere in storage and keep for nostalgia.

Most of the film was shot in a Sodo warehouse, which is pretty impressive when considering the several sets that needed to be created to do this. I still enjoyed the occasional shots from the street, which were clearly the real Seattle, where the billionaire tech genius is covered in tattoos and drives a Tesla.

Tim Gouran plays that part well, as Stanley Arkoff, who basically creates an electronic implant that enhances the experience of its user — with a fun, if not a little disco kaleidoscope action. That euphoric experience by the user is facilitated by a warehouse filled with Brain Cattle; people used as living processors. What Arkoff needs is a singer with the type of range and talent to channel song through another Deus Ex-style vocal enhancement. Mixing those two basically gives the elites back at home a brain-gasm. To be honest, it was a little confusing how it all worked from a scientific perspective, but that’s also not too important as a viewer.

Enter Devi (played by Molly Sides, lead singer for Seattle band Thunderpussy), a wild rocker who unwittingly auditions to play a goddess-like character for Brain Cattle when she thought she was trying out for an opera.

When she thinks she was rejected, she attempts to get a little more bluesy during a rock show, and that doesn’t go over well with a rowdy crowd. Devi responds in diva fashion, which ends with her in jail.

“All of a sudden, someone comes up waving this golden ticket, and you think, ‘Well, what else do you have to lose?’” Sides told the Capitol Hill Times ahead of last Friday’s screening of “Danger Diva” at the Northwest Film Forum during the Local Sightings film festival. “Devi also has quite an ego that gets shattered and replaced over and over again, and for me it’s such a great reminder that in life nothing is certain.”

Anyone who has ever heard Thunderpussy rock a stage knows Sides has an amazing voice, and the band’s work on the soundtrack really makes “Danger Diva” feel like it was made more for us here in Seattle.

Sides grew up in Idaho, and had spent every summer as a kid at a drama camp, but hadn’t been doing much acting when the opportunity for “Danger Diva” came up, aside from some music videos.

“I did a lot of physical theater, I would call it, but I got an email one day from somebody from On The Boards, because I had performed at On The Boards and volunteered while I was at college at Cornish,” Sides said.

She was connected to McGinley and, after a two-hour phone conversation, received the script overnight.

“It just felt like the right invitation for something quirky and weird and out my comfort zone,” she said.

“Danger Diva” is definitely quirky and weird, but McGinley doesn’t take the film too seriously. There are really strong moments of dialogue, but then there are also some cheesy and hilarious one-liners.

There are plenty of little digs at the culture we live in, and it isn’t hard to see how tweaked it could become in a few short years.

While Molly Sides made the film, with her sultry voice, Tim Gouran gave a standout performance as the villainous Seattle billionaire who likes to base jump, turn the city’s homeless into Brain Cattle and also look for ways to upload his consciousness before he dies.

The characters weren’t as fully developed as we’ve been forced to experience with any three- to four-hour long Oscar contenders out there, and the story progresses rather quickly and ends just the same, though with that same satisfaction you used to get from those old ‘90s films where the hero rocks into the credits.

And it was fun to watch Sides flex her acting chops while continuing to show people why she and the whole Thunderpussy gang have nowhere to go but up.

“I felt like I morphed into her day to day,” Sides said of her character, Devi. “When you shoot a movie, you shoot out of script. It’s not a linear process. Sometimes you’re shooting the end scene on the first day of the shoot, or you’re filming a love scene and you just met that person.”

There is a certain scene in the film that definitely tested Sides as an actress, which really would be giving away a lot. Let’s just say it requires a lot of guttural sounds and wincing.

“Danger Diva” will show again Oct. 6-7, 14 and 18 at the Grand Illusion Cinema, 1403 N.E. 50th St. If you’re someone who likes Thunderpussy, supporting local films, or think being a cyborg might be cool someday, this film is probably right for you.