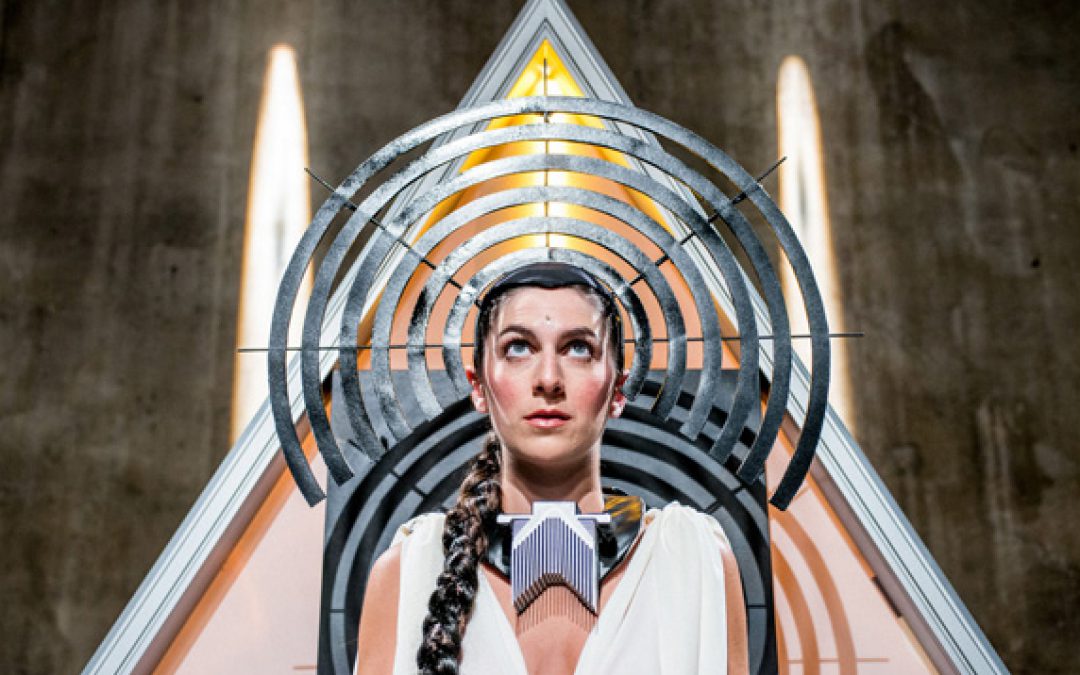 It says a lot that writer/director Robert McGinley’s Seattle-made indie flick Shredder Orpheus still feels prescient. The 1989 sci-fi rock ’n’ roll opus might be a resolutely ‘80’s funhouse-mirror of a movie, but it posits a dystopian near-future fraught with a massive chasm between the haves and have-nots, and an all-powerful media ready to keep those have-nots complacent and obedient at all costs.

McGinley continues to look into the future darkly with Danger Diva, his long-in-coming spiritual sequel to Shredder Orpheus. And what he sees today in the crystal ball of pulp science fiction is more disconcerting than Shredder‘s darkest corners.

Danger Diva follows the odyssey of Devi Danger (Molly Sides), a rock singer at the end of her rope. She’s just spent the night in jail thanks to a riot at her band’s wild gig. When she’s bailed out, she returns to find her band’s kicked her out, and her romantic relationship with Scattering, the band’s drummer (Conner Neddersen), in tatters. Andshe’s behind on the rent.

Salvation comes in the form of Stanley Arkoff (Tim Gouran), the billionaire responsible for bailing her out of jail. Arkoff, it seems, wants Devi to be the star of an ambitious rock opera. But she isn’t just getting trained and prepped for an operatic gig. Devi’s voice travels at a perfect frequency that, when harnessed, enables Arkoff and his scientists to energize and control hapless initiates serving as “brain cattle” for the wealthy elite.

Yes, it’s one silly-assed premise, but for most of its running time Danger Diva works on enough levels to readily forgive its implausibility factor. McGinley bashed out the screenplay just a couple of years after he’d completed Shredder, and he drew profound inspiration from the Reagan Era’s Star Wars program and the briefly-entertained notion of using electronic chip technology to interface neurologically with the brains of human beings engaged in anti-missile combat. And given the rise of virtual reality and interactive technology in recent years, it’s easy to accept, wholesale, even the most outlandish aspects of the science on display here.

Besides scrutinizing technology’s potential as a tool of destruction and subjugation, Danger Diva also shares its predecessor’s roots in mythology. Shredder honed in on Greek myths, while two of the Hindu religion’s most potent figures—the nurturing, divinely feminine Devi and the endlessly destructive/regenerative Kali—coexist (sometimes violently) in the lead character, Devi.

For anyone who’s seen her fronting her ace rock band Thunderpussy live, it’ll come as no surprise that Sides, that band’s lead singer, goes to town in the leading role (kudos to McGinley for giving the band its moment in the spotlight when he’s not utilizing Regan Remy’s great score). Sides is tough, vulnerable, wounded, pissed off and brilliantly theatrical at equal turns, and it’s surprising that McGinley didn’t create the movie as a vehicle for her.  And pound for pound Danger Diva sports one of the best acting ensembles McGinley’s ever had at his disposal. Gouran leavens his charisma with an effortless, every-guy charm that almost involuntarily elicits empathy. And veteran Seattle stage actress Amy Thone covers the role of Devi’s mad scientist/vocal instructor with enough nuance to render the conflict between her conscience and the corporate line unpredictable and engaging.

In the grand tradition of pulp science-fiction, Danger Diva loses its marbles towards the end, chucking most of its big ideas aside in favor of a hellzapoppin’ finale that stirs everything from The X-Men to Carrie to Scanners into the stew. But it’s never less than entertaining, and at its best the writer/director shows off how far his filmmaking chops have come. The three decades between Shredder Orpheus and Danger Diva have only sharpened McGinley’s vision. Danger Diva demonstrates that the world has caught up with his distinctive, future-shock vantage point—for better and for worse.

Danger Diva screens at the Grand Illusion Cinema October 6, 7, 14 and 18. Tickets available at the door, cash or check only.