I am woman, hear me roar: “Danger Diva” in Seattle 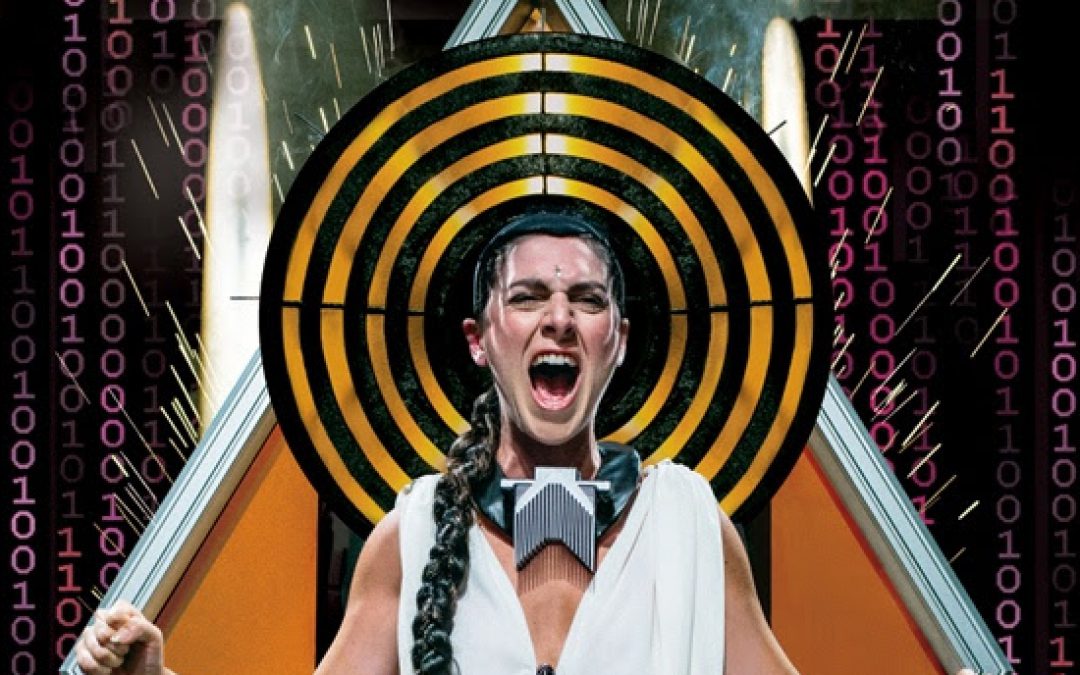 Ten years ago, the film “Danger Diva” might have seemed total fantasy. Now it’s a cautionary fable about a perhaps not-too-distant future. Shot in Seattle over a hectic 20 days in 2015, “Danger Diva” is the story of Devi, a down-on-her-luck singer (played by Molly Sides of Thunderpussy) who agrees to have her powerful voice surgically enhanced for mysterious purposes. The film returns to Seattle on September 29 at the Northwest Film Forum, with further dates scheduled October 6, 7, 14, and 18 at Seattle’s Grand Illusion.

It’s not the first time writer-director Robert McGinley has taken to the streets of Seattle to shoot a futuristic feature. The 1990 cult film “Shredder Orpheus,” made the mythological musician (played by McGinley) a skateboarder who headed up a rock band, and imagined a Seattle where the homeless live in shipping containers.

There’s a stark economic divide in “Danger Diva” as well. It’s a world where high tech billionaire Stanley Arkoff (Tim Gouran) can corral the poor into electronic sweatshops, forcing them to give up their brain power (Arkoff calls it “dedicating a portion of their consciousness”) for his Savant “wetware” application, that seeks to fuse the human brain with digital technology.

“For ‘Danger Diva’ I focused on aspects of Hindu religious archetypes, especially the Hindu goddesses Kali — goddess of death and rebirth — and the divine feminine, Mother of all things — Devi,” explains McGinley. “For the world of the story, I focused on new technology and digital implants that can supplement human consciousness. In the late ‘80s, I read an article about DARPA research for then-President Reagan’s ‘Star Wars’ defense system that postulated the use of electronic chip technology that could be interfaced neurologically with the brains of cyber warriors to facilitate anti-missile warfare. I was also fascinated by digital/electronic sweatshops and how people’s brains are utilized as processors, which inspired the concept of a ‘brain cow’ used in the film. Finally, Ella Fitzgerald’s, ‘Is it live or is it Memorex’ commercials in the 1960s inspired the ‘Danger Diva’ concept of a singer’s voice so powerful that it could be weaponized and destructive — the Kali Goddess — or musically so enthralling that it could be used for spiritual transformation — the Devi Goddess.”

Sides turns in a terrific performance as Devi, who believes she’s been hired by Arkoff to star in a new opera but quickly finds herself dealing with his hidden agenda, not to mention learning to control her supercharged voice. McGinley discovered Sides after approaching fellow On the Boards colleagues Lane Czaplinski and Sarah Wilke (McGinley was OTB’s founding Artistic Director) for suggestions on who could play Devi, a character he described as a “musical ‘Le Femme Nikita.’” “They replied in unison ‘Thunderpussy!’ — aka Molly Sides,” he says. “Once I looked at Molly and the Thunderpussy website I knew Lane and Sarah were right. So I wrote to Molly and sent her the script, then I flew up to Seattle and she read/auditioned for me and producer Brian Faker. Even though she had very little experience as an actor, she seemed to spark into the character, so we decided to give it a go. It was exciting to see her grow into the character and get better every rehearsal and every shooting day.”

Thunderpussy played live at the film’s world premiere at Seattle’s Egyptian Theater last April, and footage of their set will be shown after the September 29 screening. “With additional Thunderpussy/‘Danger Diva’ shows being planned for west coast cities, the goal is to create the communal experience of event cinema and rock out!” says McGinley. “As you know, the mantra and the log line is ‘Give me some analog!’” A DVD and soundtrack release is likely as well.